Raff’s Piano Works vol.6 takes us across his piano oeuvre, mixing early works and more mature compositions like Fantasy op.142 and Memories of Venice op.187. These are works of emotional density where Raff fused his exquisite melodic skills with complex harmonic and contrapuntal structure. For me, Thomas Mann’s Venice it may not be but Guardi’s dramatic and richly colourful Rialto Bridge consistently links and sums up the beauty of Raff’s writings in this volume. – Tra Nguyen

In contrast of Raff Piano Works Vol.4 where I wanted to show Raff’s vitality of youth and his great understanding of the piano with his early and often sparkling compositions, Vol.5 displays works of maturity. The delicacy of Leaves and Blossoms Op.135 requires subtle shifts in moods and colours, while the substantial Sonata Op.14 (totally revised in 1881, one year before his death) is a great work of musical structure and emotional depths. The soul-searching stillness of the slow movement leaves one with a profound sense of quiet hope. – Tra Nguyen

Raff’s writings consistently show a deep understanding of the piano’s mechanism and its colour palette, though there is little recorded evidence that he played or performed as a pianist. I simply put it down to his time spent in Weimar as a close associate of Liszt where he was eager to get acquainted with the piano literature and with Liszt’s own writings. Then, the 12 Romance en forme d’Etude Op. 8 came as a surprise: this elegant virtuosic set was composed well before he left Switzerland. Here Raff embedded pianistic challenges beautifully, almost innately, which prompted Mendelssohn to recommend him to Breitkopf and Hartel. This is a young man’s writings: the heartfelt joy and sincerity makes you want to dance and sing along. – Tra Nguyen

While the previous two volumes of Raff’s piano music showed the composer as the restrained romantic, Vol.3 is quite a departure from attitudes and strict rules of classicism. It was a real revelation for me to see Raff’s softer side, embracing a thorough lyrical, sensitive and intimate voice for the Album Lyrique op.17 and Five Eclogues op.105. These short pieces hold moments of rare sonic beauty – fragile and ephemeral as dew drops before sunrise. – Tra Nguyen

Most performing musicians would agree that the process of ‘deciphering’ the scores in order to find out the composers’ footprints behind the notations is the most fascinating aspect of what we do. The Raff’s recording projects have been very challenging in a sense that here is the composer whose musical language is very versatile and eclectic – at times it felt like learning Akkadian with German grammar! But how rewarding it can also be when the music choses to reveal its elusive beauty, switching from the spiritual stillness of slow movements to the delicacy of heartfelt miniatures, or to make one stand up to dance along with foot-tapping Hungarian finales – all asking me to come back and searching for more. – Tra Nguyen

I will always remember my first reading of Joachim Raff’s piano music in the British Library – in front of me was music filled with exquisite beauty, light and joy. It has been a privileged journey to discover and to recreate this wonderful sound world of the composer once again. – Tra Nguyen 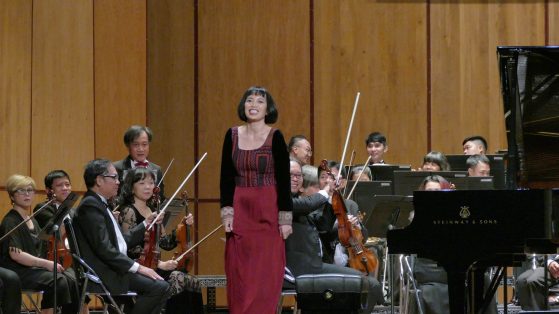 I was born in a quiet part of Hanoi in early spring, soon after the Peace Agreement was signed in Paris. As with many postwar children in Vietnam, I learnt about the basic human needs but also about the value of the selfless parental love in most vivid ways. While the living conditions then were not most comforting due to scarcity of food and electricity, I was surrounded by lots of Bach solo violin, mostly in tune, played by my father’s students. We lived in a tiny place that always felt secretive to me because there were one front door, one back door but no windows. I, however, was very happy with the world that opened up for me from my mother’s bookshelf that would take me from the mystic world of Ancient Greece to the troubled sea of Hemingway via the moon of Stefan Zweig with Japanese plum gardens spread out beneath. The state of being curious as a form of escapism has followed me since.

I have been fascinated with human voice and the rich world of sounds since I was a child so music came naturally as a way of being. Much later on, spending my teenage years in the foreign land of Russia as a student, caught up in the midst of social chaos caused by the political turmoils, I learnt that music can be one of the way to reach out to others. Music, I realised, can move beyond physical constraints, transcends metaphysical boundaries and yet, it touches and binds us together with the immediacy of sound and time.

For me, music represents the gentle power that does not divide and am grateful for its presence in my life.